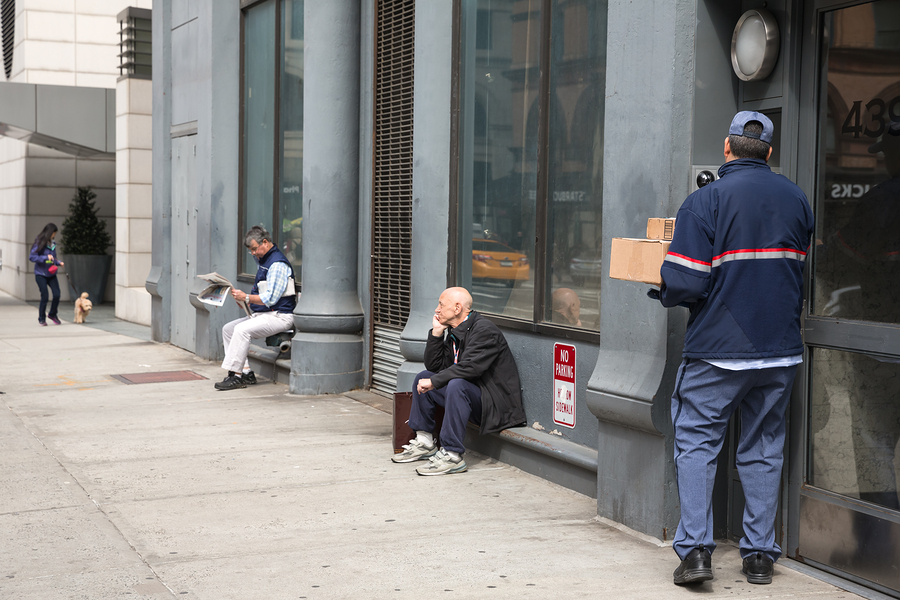 With millions of online orders delivered each day, package theft is becoming an increasingly common occurrence. Over a third of Americans have fallen victim to porch pirates or know someone who has. For younger generations (age 18 to 34), that percentage jumps to 45%.

While surveillance cameras do little to prevent robberies, they capture video evidence to help police and neighbors track down the culprit. And sometimes those videos reveal the bizarre and creative ways porch pirates are making off with deliveries.

Delivery drivers are responsible for ensuring your orders arrive safely at their destination. However, in rare cases, they’re the ones to blame for missing packages. One example of this comes from an Amazon courier who decided to keep the items he was supposed to deliver. He found a way to fake bringing customers their orders, only to take them back to the car for himself.

In a similar incident, security cameras caught an Uber Eats driver and an accomplice dropping off food to a condo, then leaving with arms full of holiday packages. That wasn’t their first stop either — a glimpse into the back seat of their car revealed several other boxes.

Some thieves just pose as delivery personnel when committing their crimes. It’s an easy way to gain access to areas where packages might be piled up, and neighbors are less likely to question them. This man got his hands on a UPS uniform and walked away with the whole stack of packages waiting in the lobby.

And the costumes don’t stop there. A thief in Omaha, NE pretended to be a door-to-door saleswoman for cleaning services. She searched porches for packages and made sure homeowners were away before taking her findings to a friend’s car. If anyone came to the door, she had a cover story ready to prove her innocence.

Swapping out deliveries with fakes

In the perfect movie-style heist, thieves slip into the scene and replace the coveted item with a replica. When the good guys hear the commotion, they’re easily fooled by the imitation, shrug their shoulders, and go about their business while the masterminds get away.

Perhaps porch pirates believe they’re acting out this sort of scene when they snatch up a package and leave an empty box in its place. One thief from Utah appeared to be familiar with this routine when he approached a family porch with a hollow box, set it neatly on the doormat, and walked away with the real deliveries. Another man in Austin did the same, hitting multiple houses in the neighborhood.

But homeowners are fighting back against box burglars with a taste of their own medicine. Typically filled with surprises like kitty litter, dog bags, or dirty diapers, these decoy boxes are an effort to make thieves reconsider their offenses. Other victims have taken it a step further and set up booby traps and explosions of glitter triggered by unsuspecting thieves.

Children and pets as accomplices

Unfortunately, children can get caught up in porch shopping sprees, too. Onlookers are less likely to suspect them, and, oftentimes, their parents are waiting in a nearby car ready to make a quick escape.

One little girl seemed to be receiving directions from someone before making her way to the front steps of a house in Maryland to grab a box. And a boy in New York snatched someone’s birthday gift before retreating back to his guardian. The victim of this case was less upset about the stolen package and more disappointed by the child’s upbringing. “The kid, I don’t blame him for it,” he said. “I blame the parent, not even teaching the kid right from wrong.”

Some accomplices are less willing to engage in the crime, like this duck that sounds off in protest while his owner stoops to steal a delivery. Dogs, however, seem to enjoy it. A retriever in California walked off with his neighbor’s box, wagging his tail the whole time. And two dogs from Ohio were hoping for an early Christmas when they tore into their owner’s Amazon package.

Crime just isn’t complete without a flawless getaway. A car pulls up, the thief hops in with the prize, and they’re out of sight. However, these porch pirates either fumbled through their exit or chose an unusual ride.

A thief escaping with a flat-screen TV didn’t think through how he would carry the oversized package, let alone fit it into his getaway car. After a fall while running through the yard, he tried unsuccessfully to stuff it into the trunk, finally squeezing it into the back seat and speeding off with the door open.

Other crooks take off in a more unique set of wheels, like the woman who drove off in what looked like a golf cart, or the mother who decided to use her child’s stroller to stowaway her stolen items.

But no matter how they choose to grab and go, package theft is an easy crime, and very few perpetrators end up in handcuffs. Police estimate that less than 10% of reported cases result in arrests.

Fortunately, there are a few actions you can take to deter porch pirates, like installing surveillance cameras, directing your deliveries to alternative addresses, or startling thieves with alarms. But none of these options have the same level of protection as smart lockers.